In the Name of Jesus. Amen.
The cross is offensive. It repels people. Yet, the cross is where Jesus draws sinners to Himself. The cross is gruesome and gory. Yet, the cross is beautiful to a believer. The cross was in instrument of horrendous torture, a cruel and unusual punishment. Yet, the cross is an occasion for our joy. There forgiveness of sins was won. It doesn’t make sense to reason that God would allow His Son to die, or for that matter, even suffer. Scripture calls humanity to more than a rational understanding of the facts about Jesus. We are called to something higher than even morality. Only faith can see the purpose behind the blood, sweat, tears, and Jesus’ passion, crucifixion, and death. Faith is the Power of God at work in you by His gift.
Newsweek religion editor Kenneth L. Woodward wrote: Clearly, the cross is what separates the Christ of Christianity from every other Jesus. In [modern] Judaism there is no precedent for a Messiah who dies, much less as a criminal as Jesus did. In Islam, the story of Jesus' death is rejected as an affront to Allah himself. Hindus can accept only a Jesus who (passes into peaceful samadhi,) is a yogi who escapes the degradation of death. The figure of the crucified Christ, says [one noted] Buddhist (Thich Nhat Hanh), "is a very painful image to me. It does not contain joy or peace, and this does not do justice to Jesus." There is, in short, no room in other religions for a Christ who experiences the full burden of mortal existence—and hence [for them] there is no reason to believe in him as the divine Son whom the Father resurrects from the dead. . . .That most of the world cannot accept the Jesus of the cross should not surprise, either. Citation: Kenneth L. Woodward, "The Other Jesus," Newsweek (March 27, 2000), p. 50
Jesus Himself declared that He was the Way, the Truth, and the Life. No one comes to the father except through Him. For a person to claim that there are many valid ways to salvation is to say at the same time that Jesus is a liar and a fraud. Faith cannot say that. To reject Jesus as crucified is to reject the Jesus of the Bible. Faith cannot say that, either.

As we begin to wrap up, let’s hear the verses immediately after today’s assigned text: For consider your calling, brothers: not many of you were wise according to worldly standards, not many were powerful, not many were of noble birth. But God chose what is foolish in the world to shame the wise; God chose what is weak in the world to shame the strong; God chose what is low and despised in the world, even things that are not, to bring to nothing things that are, so that no human being might boast in the presence of God. He is the source of your life in Christ Jesus, whom God made our wisdom and our righteousness and sanctification and redemption. Therefore, as it is written, "Let the one who boasts, boast in the Lord."
Consider your calling. By water and the word, you were called to discipleship. You were not called to silence or to just sit there. The baptized are taught the faith so that they may teach others and bring them to Holy Baptism. Disciples are made by means of baptizing and teaching. That is the power of God at work.
The power of God is found where God told us it would be: the Word, forgiveness, Baptism, Communion. The forgiveness won on the cross of Christ is given out today in Word and Sacrament. It shouldn’t be a surprise, but for many, even some raised in the Church, it is. The power of God is found right where God promised to be. That’s why we go to Church. That’s why pastors make visits, especially to shut-ins. Salvation is by grace, through faith, in Christ. The Lord gathers you to Himself and gives you faith so that you may receive His gifts. We cannot even claim credit for being gathered to Church, believing, or receiving. Those are all passive acts. He is the giver. The Lord is the one acting for your benefit. Christ is the power of God.
When a pastor reads the Gospel lesson of the day, it is one more reminder of the power of God, Christ’s presence among us. Christ became man, conceived by the Holy Spirit and born of the virgin. He dwelt among us. Good News! Behold! Your King comes to you!
Early in the fourth century, Christianity became a legal religion in the Roman Empire. It was of benefit to be a Christian, not to mention less dangerous, so congregations grew. Roman money poured into the growing churches and buildings also grew. That became a problem, albeit a good one, for the clergy. Without pews, the basilicas were full of people singing psalms. How were the clergy to get through from the back to the front? Someone came up with the idea of taking a cross, putting it on a tall pole, and leading a parade through the assembled congregation, officially starting the service.
Your processional cross is used in a very similar way. A procession begins special services. In a way, it is a reminder of Jesus’ procession into Jerusalem on Palm Sunday. Blessed is He who comes in the name of the Lord! Hosanna in the Highest! Behold, your king is coming to you, humble and mounted on a donkey.
One of the many good things about being Lutheran is that we “may” do some traditional historical Christian practices. We don’t have to, but we can, in Christian freedom.
Christ is the power of God and the wisdom of God. Some ceremonies may be done or may not be done without any harm to faith. The same ceremonies, when explained, can be of benefit. The point is not the ceremonies, but what God did for you on the cross, and that His power is made manifest in suffering. The Lord is with you when you suffer. He has good gifts for you.
No matter what this life, our culture, or any activist group, judge, or government throw at you, remember that the wisdom of this world will pass away. Only the Word of the Lord endures forever. Even when someone calls you or your Biblical beliefs “foolish,” remember that the foolishness of God is wiser than men, and the weakness of God is stronger than men. For since, in the wisdom of God, the world did not know God through wisdom, it pleased God through the folly of what we preach to save those who believe. For Jews demand signs and Greeks seek wisdom, but we preach Christ crucified, a stumbling block to Jews and folly to Gentiles, but to those who are called, both Jews and Greeks, Christ the power of God and the wisdom of God. Amen.
In the Name of Jesus. Amen.
Posted by revpaulcain at 11:59 AM

The Lord Has Good Gifts for You at Immanuel! 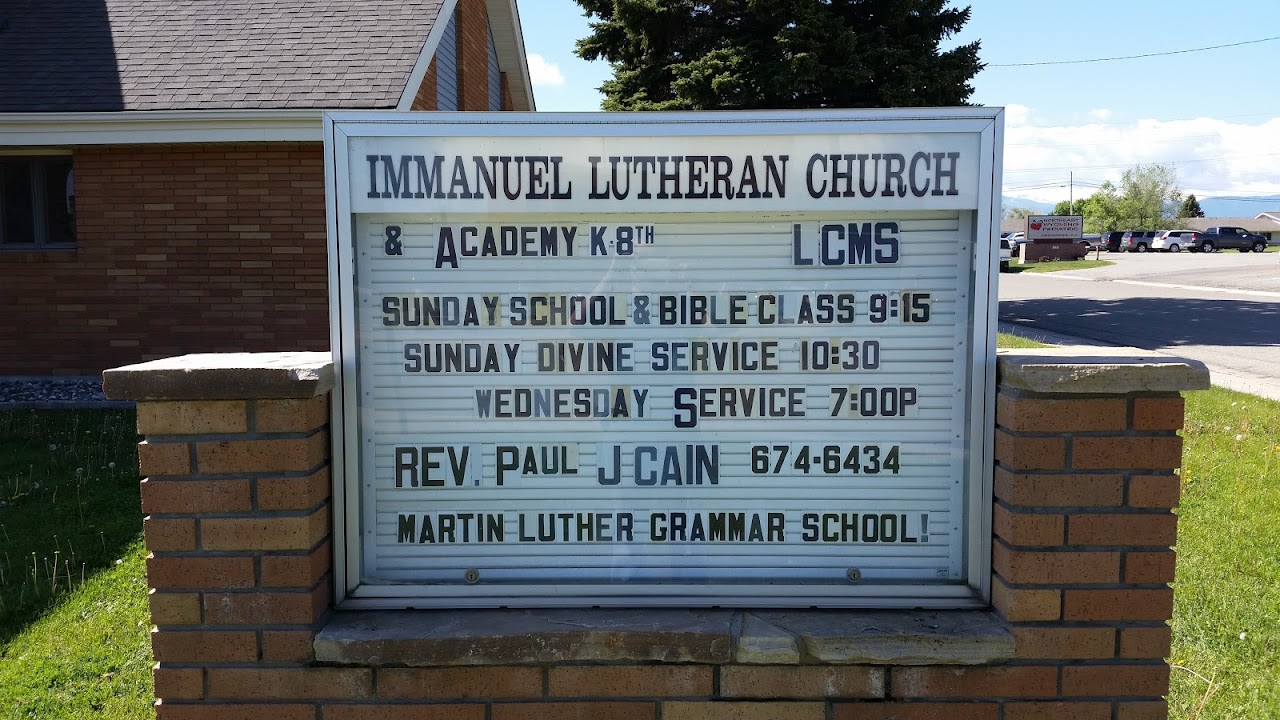 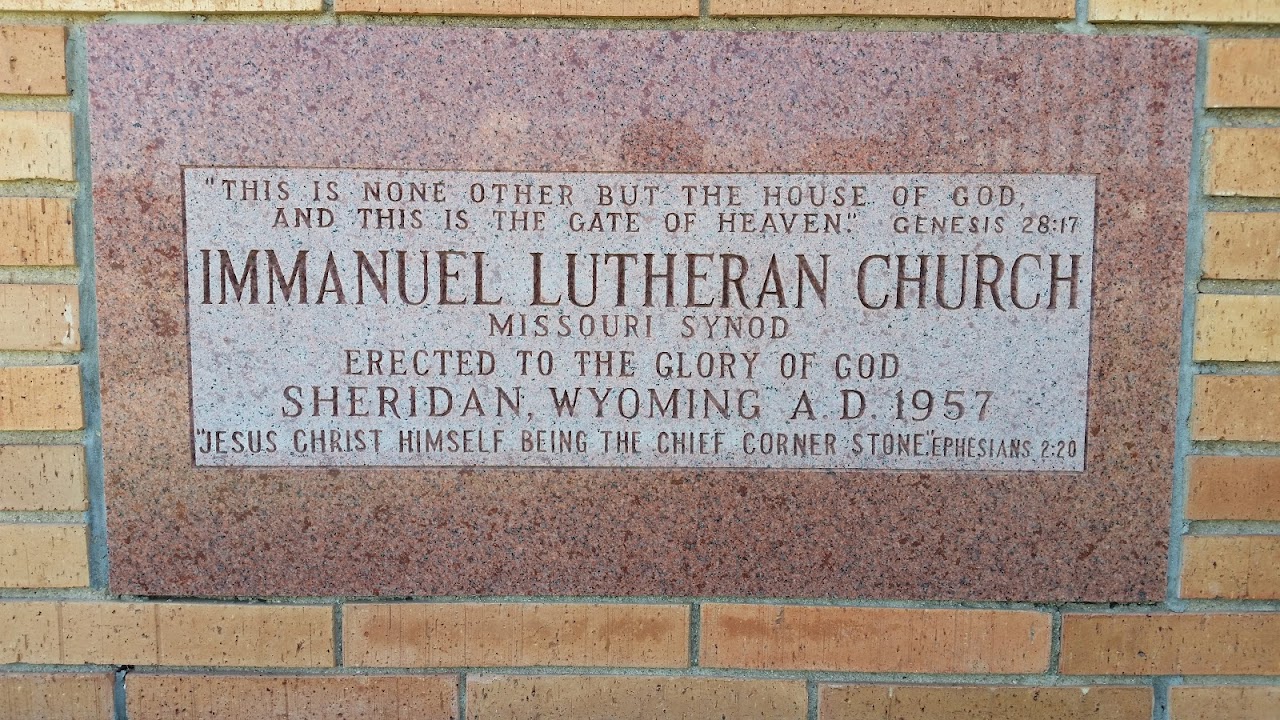 Posted by revpaulcain at 9:36 AM

Watch Live Facebook Video HERE (May not work on Firefox)

Physical and Mailing Address (for Offerings)
1300 West 5th Street
(across from the Hospital)
Sheridan, Wyoming 82801

Children are welcome to attend Sunday School, Vacation Bible School, and our Sunday and Wednesday services!
Our Junior/Senior High Youth Group meets regularly on the Second Sunday of each month.

Immanuel is a member congregation of The Lutheran Church--Missouri Synod (LCMS) and is committed to the doctrine and practice of the Lutheran Church as presented in The Book of Concord. We are a congregation uniquely and intentionally devoted to liturgical worship, to the centrality of Holy Communion and Holy Baptism in the life of the Christian, to catechesis (Christian education), and to classical education through Martin Luther Grammar School and Immanuel Academy.

About Our Senior Pastor

Listen to Sermons and Historical Recordings